This magic band of Light is the trunk of the celestial ceiba tree and the basis of chiefly authority.

So Anakakula was an illegitimate ineffectual chief and he usurped the sacred authority of kacique chief when he assumed the seat of power upon the chief’s duho. All he wanted was power and prestige. He really cared nothing for the welfare of his tribe. He was cruel and despotic in his leadership but the people had no other alternative. He promptly made promises to the community that he would solve the problems of disease and death in the cave, he would restore the women to the tribe by personally hunting down and bringing back the wayward leader, Guahaiona, and he would punish him for his great crime.

Anakakuia set out to hunt down Guahaiona and the women. He used his magic powers inspired by negative spirits to find them. He confronted Guahaiona and tried to use his magic to persuade him to return with him and bring the women also. Guahaiona suddenly came to a full realization of what he had done. Not only was he responsible for the awful consequences of depriving the cave community of all its women, but he was also responsible for the establishment of a false Cosmic Center in the tribe, a false cacique. His feelings of guilt grew as well as his fear of what would happen to him if he fell under the magic spell of this awesome new tyrant with his evil supernatural support.

Repentant, Guahaiona devised a plan to get rid of Anakakuia. He promised the illegitimate chief that he would return with him back to the cave and bring all the women with him. The whole group packed and began the trek back. Eventually they reached the shore of the primordial sea that lay far beyond the land of humans. The land of humans still had no sea.

It was dry and the only water to be found was in rivers and streams. Upon reaching the cosmic coast at the edge of the horizon they camped. Guahaiona invited his brother-in-law to go fishing with him in the primordial sea and Anakakuia accepted the invitation. They set out on a dug-out canoe and rowed not far from shore. Out there they cast their fishing lines. As they waited for the fish to bite Guahaiona pointed to a large beautiful conch shell that lay in the clear depths of the shallow water. Anakakuia leaned over the gunwale of the canoe to take a closer look at the shell. As he did that, Guaguiona stood behind him. He grabbed Anakakuia by the legs an flipped his whole body into the water. The illegitimate leader drowned and his body drifted away out of sight. Thus ended the reign of terror of the false Cosmic Center. This event is celebrated annually in the tropical heavens during the time of the year when the constellation of the Big Dipper, which represents Anakakuia, dives temporarily into the marine horizon. Now a legitimate Cosmic Center could be restored to the chiefly duho seat, a Cosmic Center that represented the Heart of the galaxy instead of the pole star.

At that point Guahaiona hesitated as to whether to return to the cave community or not. As he hesitated Guakar finally chose to bring the terrible manaia hatchet of divine retribution crashing down upon his head. But he did not kill him. He just made Guaguiona very sick. Soon Guahaiona was in terrible pain. His suffering was awful and he sought a cure by trying to wash the sores from his body.

He abandoned the women to their fate in an island on the primordial sea called Matinino (the place where there are no fathers). He wandered about pitifully searching without success for a cure. Eventually he came upon one of the women he had kidnapped. Somehow, she had managed to escape his power and had set up housekeeping all by herself near the shore of a river. The woman was called Guabonito and she took pity on Guahaiona’s plight. She cured him by secluding him in a chamber called a “guanara” and treating him with special medicinal herbs and shamanic chants. She was a powerful magician and soon he began to recover.

Guaguiona stayed with Guabonito for a while. As he became healthier each day Guabonito taught him how to plant using the koa stick. She also taught him how to make ritual stone amulets (sibas) to strengthen his magic powers. She also presented him with a gift of chiefly gold ornaments (guanin) so that he could return to the tribe appropriately attired. Seeing the change in Guaguiona, Guabonito gave him a new name, for it is the custom of the people to take a new name after surviving a terrible illness. It is considered as if one has been re-born and so one needs a new name. She called him “Albeborael Guahaiona”.

The time came for Guahaiona to leave the home of Guabonito. The repentant and grateful chief bade leave of his hostess and eventually returned to the cave Cacibajagua. He arrived eager to relieve the people from the terrible ordeal that he himself was in large part responsible for inflicting upon them. 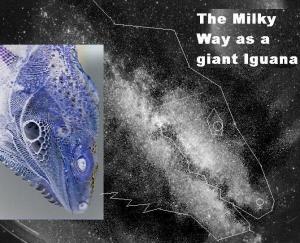 The grand luminous band of stars that stretches accross the tropical sky, the Milky Way Galaxy, manifests itself to the Native people as both a great tree growing through the center of Creation and also as a giant celestial iguana that represents the reptilian character of the Cosmic Mother.

The community of grieving men at the cave found themselves without women. When Guahaiona returned It took some time for the community to accept him back. He had to earn their trust again.

While Guahaiona had been away the men hesitantly ventured out of the cave from time to time, and found that the outside world had become fully formed. It was ready for human habitation. They travelled to the river to wash and purify themselves. While they were there they noticed among the branches of the trees some creatures romping and playing about. These creatures were shaped like people but had no sex. They lacked gender. Because of that, even though they had the shape of humans, they had no real humanity. Also, their flesh possessed a strange quality. It could transform from a slick, slippery rubbery consistency to that of hard wood, and very smooth like statues. When their skin was wood-like it was very hard and very difficult to crack or break. These creatures were entities of the forest and so they possessed the wisdom of the woodlands. But they lacked ethical value or morality, and so their wisdom was wasted.