The Solstice Ceremony honors Yoka Hu at the two extreme points of the solar cycle. In the Summer, on the longest day of the year, a day that demonstrates the sun’s strength at it’s greatest we humans honor the Sun spirit for his greatness and his ability to send Life-rays to the Earth. On Winter Solstice, the shortest day of the year, Yoka Hu completes his journey through the realm of Death, defeat and sacrifice. He finally reaches the nurturing womb of Ata Bey and begins to gestate there in preparation for his eventual rebirth in the Spring. We celebrate that triumph over Death and defeat.

Since the Solstice Ceremony is in honor of a male spirit the most important aspects of the ceremony are handled by men. At one point during the ceremony a man who is previously chosen to impersonate Yoka Hu stands in the middle of a circle of other men. He has the ends of strings attached to his belt and the other end of each cord is held in the hand of one of the men standing around him. This scene brings to mind the image of the sun with its rays radiating in all directions.

Later in the ceremony the man representing Yoka Hu is armed with a ceremonial bow and arrow. He confronts a beike dressed as Kahaya, the trickster shark, spirit guide of Guakar the Lord of Trials. They engage in a dramatic dance battle which always culminates in the shooting and killing of a shark effigy. At the point when the arrow enters the shark effigy, the man that impersonate Kahaya falls to the ground as if dead. 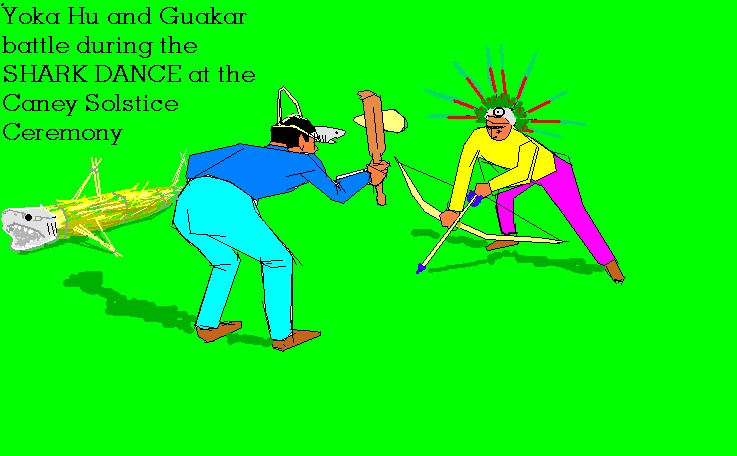 On Winter Solstice there is a special ritual that occurs at the end of the ceremony. It intails the symbolic joining of Yoka Hu and the Divine uterus of his mother Ata Bey. In this ritual an effigy of Yoka Hu in the manifestation of a dead being is tied to a coa, a representation of Ata Bey’s womb in the form of an oval-shaped hoop or “stone collar” with a graphic outline that resembles an uterus.

This is Yoca Hu returning to the womb after dying at Fall Equinox. In his mother’s womb he is re-concieved, physically re-attatched to it. 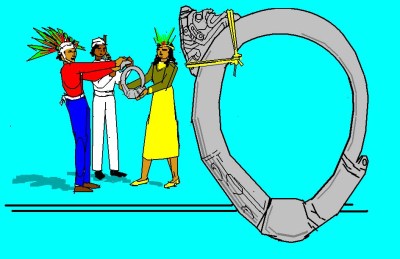 The ritual is performed by the man that represents Yoca Hu, the woman that represents Ata Bey and the beike. Yoka Hu holds the three-pointed Yoka Hu effigy against the coa hoop held by Ata Bey. The beike binds them together with cord.