Beike Sobaoko Koromo confers with Waribonex, one of the leaders of the Nacion Taina De Las Antillas at their 2006 annual Areyto.

Following in the tradition and example set by Beike Marie Maweiaru in her Unity Gathering of 2001, a gathering in which Beike Miguel Sobaoko Koromo participated, and also based on the tradition established by other beikes before that such as Maria Manati Robles, Beike Miguel Sobaoko Koromo convened his own Unity Gathering in the month of March 2006. The gathering took place in both the Caney Circle’s Verona, Pennsylvania Teaching Lodge near Pittsburgh and the main grounds of the Council of Three Rivers American Indian Center. Taino beikes and other spiritual leaders as well as leaders of various Taino organizations came together to celebrate the sacred season of Spring Equinox on the Yucatec Mayan Calendar Date of FOUR OC (March 18, 2006) and to discuss the progress of Taino resurgence and re-unification as it stood at that moment. 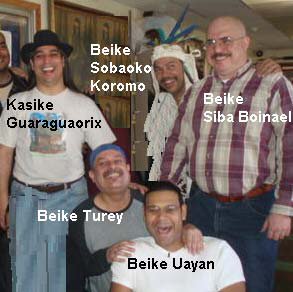