Culture of the ancient Taino

Taino houses, or “bohios” were made out of palm wood and the roof was thatched with palm leaves. Modern Cuban “guajiro” peasants still build their bohios very much like their ancestors did in the rural regions of the eastern provinces. In South Florida a construction company named “Tiki Builders” closely associated with the Ciboney Tribe led by chief Jorge Waganche offers a line of palm-thatched huts which mirrors the ancient techniques of the Taino bohio.

Much has been written on the culture of the Tainos as it existed in 1492 when Columbus first arrived in the Caribbean. There is a wealth of information in the world wide web on this subject and the visitor to our site is encouraged to explore the excellent websites of the Jatibonicu Taino Tribal Nation, The Taino Nation “Nacion Taina”, Biaraku, United Confederation of Taino People, and many others which contain valuable material on the ancient culture (please see our list of website links in the “introduction” page of this website).

There are a number of very important essays available on the internet including that by the Taino college professor working at Cornell University, Jose Barreiro.

There are also a number of books in print which make the culture of the ancient Taino very accessible to the reader in both English and Spanish.

Because there is so much information available on this subject we will not attempt to duplicate that enormous effort here. We will simply present a very brief exposition of the ancient traditions and allow you, the visitor to our site the freedom to explore this subject more fully elsewhere.

At the time of Columbus’ arrival in the Caribbean area theTaino people inhabited fairly large and well-distributed villages all over the greater islands of the Antilles. Led by local chiefs called “caciques” the people lived in huts made of palm wood, roofed with palm-fronds. They were expert cultivators using their digging sticks called “coas” . They were able to produce abundant harvests of yuca, a tuber-bearing plant which was their mainstay starch food, as well as tomatoes, peanuts, potatoes, beans, maize corn, avocados, peas, and many other vegeatbles. They also harvested a wide array of nutricious tropical fruit such as guanabana, papayas, guavas, genippes, pineapples, and many more. 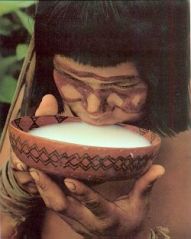 These people were skilled craftsmen and artists, and were capable of producing fine pieces or art from stone, wood and ceramics. 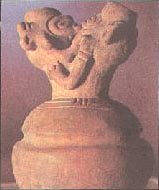 They were able dugout canoe-makers and used their ocean-going crafts to navigate the treacherous straits between the caribbean islands on a regular basis. The word “canoe” is derived from the Taino word “canoa”. 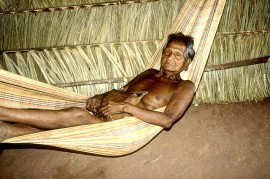 The Taino brought the tradition of sleeping in hammocks from their ancestral homeland in the rainforests of South America. The word “hamock” is derived from the Taino word “hamaka”.

The Taino had a lively and profound ceremonial tradition from which we in the Caney Spiritual Circle draw our inspiration. Their beliefs were expressed in ceremonies like the ritual ball game called “batu” or “batey” using ritual stone collars, and the musical ceremonies called “areitos” that included dances called “guarachas” and the telling of legends. These were very similar to modern dances still performed by Native peoples living in the South American rainforests where the Tainos originated. These ceremonies served to provide the element of sacred ritual and reverence within a communal environment. They helped cement the bond between the people and the Divine as well as the relationship between folks themselves.

With the rhythm of the maraka rattle, a modern Arawakan rainforest shaman leads an all-woman song ceremony in the rainforest of South America. The ancient Taino possessed a matrifocal culture in which women played a very prominent role in social and religious life.