In 1985 Beike Bo Miguel Sobaoko Koromo Sague was inspired to read an epochal testament of Mayan prophetic vision. It was a book named “The Mayan Factor”. The book had been written by a Mexican American visionary named Jose Arguelles.

From this fountain of mystical information Arguelles identified a series of important nexus dates in the stream of time stretching from the 1980’s to the year 2013. He studied the cycles of the Mayan calendar very carefully and discovered layer upon layer of hidden meaning and relevance in this ancient time-measuring device.

One of the most important facts that Arguelles pointed out was the upcoming event which he named HARMONIC CONVERGANCE, scheduled to take place in August of 1987. This cosmic event arrived and was observed by thousands all around the world. The Caney Indian Spiritual Circle observed the event at the site of the Council of Three Rivers American Indian Center near Pittsburgh Pennsylvania. We erected a wooden replica of a Mayan pyramid and temple and we spent the weekend in meditation, ceremony, song, dance, environmental activism, and celebration. Over 200 souls attended our grand event at the Indian Center site here in Pittsburgh.

The Dreamspell is a special interpretation of the ancient Mayan Calendar which was channeled from the ancient Mayan priest-king Pacal Votan through Jose Arguelles in harmony with the oracles of the Jaguar Priests of the Yucatan the Priests of Chilan Balam. The count of days in the Dreamspell does not coincide with the count of days of the ancient Classic Maya calendar or the calendar of the present-day Quiche of Guatemala. It is not meant to do that at all. Instead it is meant to be used in harmony with and not in competition with those other calendars see the statement by the Dreamspell Movement on this subject for further explanation.

Later, in 1992 Beike Bo Sobaoko Koromo was inspired to begin teaching the secrets of the Mayan calendar as these were taught to him by his father Dr. Miguel Sague Sr. an university professor of Mayan culture and by Jose Arguelles himself who visited the Council of Three Rivers American Indian Center in the early 1990’s to bring the gift of his new interpretation of the calendar. He brought the brilliant new calendrical tool called the Dreamspell. This tool was a gift from the spirits of the ancient Mayas. It clarified the basic tenets that Arguelles had ellucidated earlier in his Mayan Factor book and turned the whole process into a masterful work of Art.

The Dreamspell distilled the cycle of the Mayan calendar into the imagery of a journey. The journey takes the traveller through a mystical trek of time cycles based on the wisdom of the Mayas. The main cycles are imaged as a set of five great castles. Each castle is composed of a number of rooms. The traveller is invited to enter the journey by going into one of the many rooms of one of the magic castles. This room represents a specific day. The traveller stays in that room all day, drawing in the magic and meaning of that room’s occult possibilities. On the following day the traveller exits the room and goes to the next room. The traveller spends the whole day experiencing the unique possibilities of this next room and observing its magical properties. On the next day the traveller steps into the next room, and so on, living and breathing the magic of each day as the Mayas meant it to be done.

As part of the gift that Arguelles brought to Pittsburgh in 1991 he left us a copy of his Dreamspell kit. It was an artistic graphic interpretation of the journey through the castles of time. 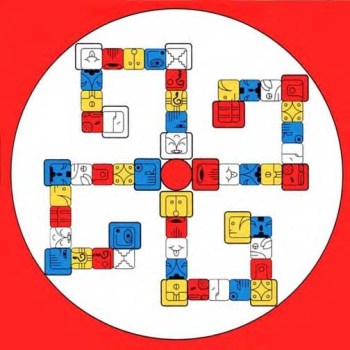 The graphic expression of the Dreamspell castle is a schematic diagram. It is designed like a colorful cross made of four curling branches. Theses branches are long rows of colorful symbols strung up in strings of thirteen. Each row curls at right angle creating a kind of spiral. Each row represents one of the four wings of the castle. Each symbol represents a room in that wing.

The Caney Indian Spiritual Circle officially observes the interpretation of the Mayan Calendar as presented by the Dreamspell that Lord Pacal of the Mayas granted to Jose Arguelles, and through him to us. This interpretation does not coincide exactlty in its assignment of day-names with that of the Classical and traditional Mayan calendar readings. It isn’t meant to do that. It is a “New Dispensation” and when followed with shamanic insight it compliments our readings of the traditional Mayan calendar perfectly.

We of the Caney Indian Spiritual Circle follow both calendars simultaneously. As a result of that we read the auguries and oracles of the calendars from both perspectives to provide a complete and well-rounded image of the mystical wisdom.